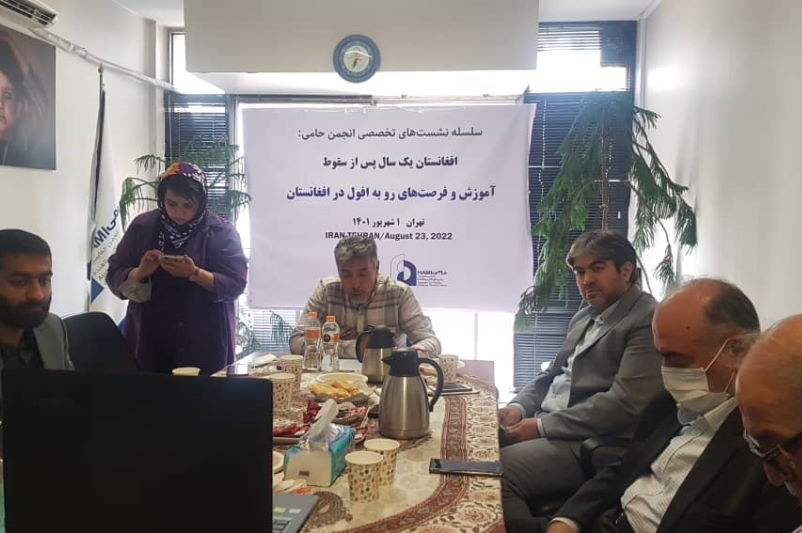 In continuation of its series of meetings about Afghanistan, one year after the fall, Hami Association held its second meeting dedicated to the issue of education.

“Education and declining opportunities in Afghanistan was the main subject of this event that was held by the presence of   a number of cultural and political  professors and experts  who discussed the  issue of education in Afghanistan after the Taliban. 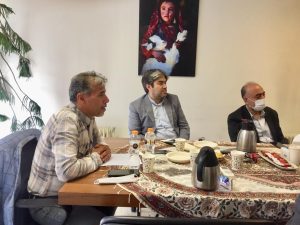 Mojtabi Nowrozi – the former deputy of the cultural consultation of the Islamic Republic of Iran in Afghanistan – considered the demography, the rural system and the type of Afghan society as the factors that have made education a challenging issue in this country, and this challenge has become more difficult after the rule of the Taliban.

According to Nowrozi, although there are more worldly and understanding people among the Taliban who have no problem with education and training, but because they know that people’s awareness weakens the foundations of their government, they also support traditional leaders.
He considers one of the factors of being in the current situation to be the failure of education to reach a stable point during the past 20 years, and he stated three reasons for instability:

– The traditional structure of the Afghan society and the negative view of education among a part of the common people
– The weakness of the central government and the failure to provide the necessary infrastructure, which resulted in a large gap with the minimum standards for institutionalization.
– The mistakes of Westerners as the custodians of governance in Afghanistan and the way that was taken to change education in Afghanistan, which hindered the sustainability of education due to the lack of resources or extensive corruption in the use of existing resources.

The Taliban government, which is the result of the dominance of primitiveness over civilization, is more stable in areas such as central and urban areas of education, and more results have been achieved, due to the behavior and attitude of the people themselves, and the former government of Afghanistan did not play a significant role in creating these conditions. In fact, those who should have made serious policy-making in the field of education did not care about it.

The Taliban will not change from within, at least in the short term, and what can force them to change is the pressure from the outside, that is, from the Afghan society itself, to force them to partially satisfy the demands of the people, including education.

Such a change is conceivable in the medium and long term, but in the short term we cannot hope, and even if they accept something, they will not value education and educated people.
Pointing out that for the past year, education has continued in an underground and virtual form in Afghanistan, .”

The danger of ideological citizens in Afghanistan for the entire region

The approach of the Ministry of Culture of Afghanistan over the past years has been to have a good citizen and reduce the challenge and conflict with parents and the traditional part of society regarding education and training, especially for girls.
Dr. Mirwais Balkhi – the former Minister of Education of Afghanistan – was one of the other speakers of this meeting. He said that unfortunately, with the rule of the Taliban, we are witnessing a return to the past and all the structures that have been formed are collapsing.

He said that the conditions of education in Afghanistan were better than before the fall of the government. He added, “We had experienced and good teachers who were trained in different countries like Iran. In recent years, teachers had good conditions, especially in big cities, and even private schools were set up in Afghanistan, but now, unfortunately, every day we hear about the closure of some of them. On the other hand, teachers are forced to leave their jobs and start other jobs due to lack of personal and financial security and threats from the Taliban.

Balkhi pointed out that before the war and domination, the Taliban wanted schools in the areas under its control to be converted into religious schools. After the end of the course, they can’t get a job and they don’t know anything except to lead mosques or muezzin, and unemployment and related conditions make them disillusioned people. This situation causes the Taliban to recruit from among these people. Ideological citizens who are a serious threat to their society, neighboring countries and even other countries in the world.”

According to Mirwais Balkhi, before the defeat of the Afghan government, the number of these people was estimated at 150,000, and it is estimated that they will increase to 300,000 people, which will result in multiple recruitment of Taliban and ISIS.
Referring to the attention of some families to their children’s education, Balkhi listed excessiveness as one of the negative factors affecting the education process in Afghanistan: “Even in the most remote parts of Afghanistan, there were fathers who took their daughters to school 20 kilometers away by bicycle and back, or heads Some tribes in southern Afghanistan had set heavy fines for preventing girls from getting an education. “Intensification of poverty in this situation is the main obstacle to children’s education, which causes the number of children who engage in hard work to double, triple and quadruple.”
At the end of his speech, he mentioned that maybe some problems that arise as a result of Taliban rule will be solved in a short time, but the crisis caused by the reduction and suspension of education will not be solved soon, and one of its results is the risk of terrorist operations in Afghanistan and other countries.
In March 2019, after the Corona epidemic and the closure of schools and universities in Afghanistan, this country used Iran’s experience for virtual education, and a virtual network of Iranian and other countries’ professors was formed and held 602 programs during the Corona period, 42% of which were with It was Afghanistan.

Dr. Mandana Tishehyar, a member of the academic staff of Allameh Tabatabai University, called the definition of study opportunities for Afghan professors in July 1400 and on the eve of the collapse of the Afghan government as another cooperation between Iran and Afghanistan in the field of higher education

We have been looking for different solutions to continue education in Afghanistan, and online schools and self-governing schools are two of these solutions. Considering the difference in dialect and accent and even students’ books in Afghanistan, we tried to use Afghan teachers in Iran and even other countries to teach while preparing the books.

According to Tishehyar, the goal is to continue children’s education even in a limited way and for some periods and not to stop it completely. Also, an international school has started its activity since June 31 in cooperation with the University of Sistan and Baluchistan, and its activity continues until November 4. So far, 530 Afghan students have registered in this school, and their classes are held online every day.

The idea of ​​establishing the Afghan Academia College with the cooperation of Iranian and Afghan professors has also been proposed so that Afghan students from all over the world can study in this college.
Mandana Tishehyar announced a consultation with the Ministry of Science of Iran to help those Afghan students who only have 1 to 2 semesters of their studies left. The scientific level and knowledge of these students are evaluated so that they can finish their studies in Iranian universities and get a degree.
Tishehyar reminded that such an incident has happened many times during the shared history of Iran and Afghanistan, when primitive tribes have dominated the cities and affairs of the country, and society and knowledgeable people have taught them civility and changed them. He considered changing the current conditions of Afghanistan to be the duty of the intellectuals of both countries and expressed hope that the opinion of the Taliban officials will change regarding education and especially women’s education by visiting Iran and visiting schools and universities in our country. : “During the previous period of Taliban rule, many girls and women were trained secretly and even a group called Golden Needle was formed, which gathered together as sewing training and learned writing and language from university professors, and some of them later joined the system. Afghanistan Education joined. I am sure that even now teachers and professors have formed such groups to continue education.”

Give kindness as a gift
PrevNextA series of specialized events in HAMI: Afghanistan One Year after the Taliban Takeover
PrevINTERNATIONAL DIALOGUE ON MIGRATION 2022Next